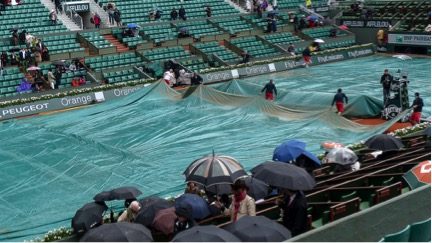 Anyone who has been around competitive tennis tournaments would know that matches rarely go on at their scheduled times, and making matters far worse can be the dreaded rain delay. With the rains of Wimbledon upon us, it’s a good time to talk about how to manage competing when the weather isn’t cooperating.

Being a smart tennis player, you already know that going out on the court with a full tank of gas is critical for being at your best. This means you’re probably eating a fairly large meal about three hours before your match that includes a good whack of carbs and some protein. You’re also smart enough to do things like take a banana with you from the hotel breakfast buffet in order to top up the tank between your warm-up and the start of your match. Perhaps you remembered how to travel like a pro, and were able to stop at the grocery store to stock up on food.

But how many of you come prepared with enough food to keep you filled up if your match goes on two, three, or even four hours after the scheduled start time! To share an example that illustrates the importance of having snacks on hand as you’re waiting to go on court, a pro tennis player that I work with was recently in a tournament that had a number of rain delays.

… a pro tennis player that I work with was recently in a tournament that had a number of rain delays.

6 pm: He ate a small sandwich (6” sub) so that he didn’t have too much food in his stomach when it was time to play.

7 pm: Only some of the courts could be dried, so it was starting to become clear that the match would go on later than expected.

11:15 pm: Critical points at the end of the second set, which my player ended up winning.

The thing to remember is that some of the most important points of the match came at the end of the second set, which was over five hours since his last substantial food intake. If a few key points didn’t go his way he could have found himself in a third set. In that case the critical points in the match would have been happening around midnight, or over six hours since eating that sandwich!

In that case the critical points in the match would have been happening around midnight, or over six hours since eating that sandwich!

He was smart and was snacking on dates while waiting to go on, though he probably would have been better off eating another half sandwich around 7 pm as it became clear that his match wasn’t going to start for a while. He also did a good job of fueling on the court (with sports drink and dates) during that match, and was able to take care of business.

The key point here is to have foods to snack on while you’re waiting to go on court! 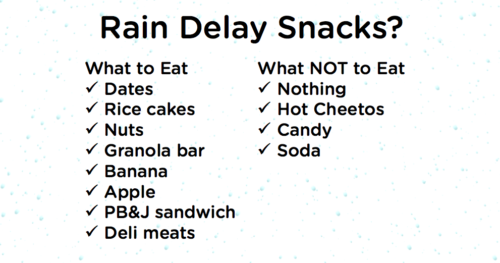 One of the most important things is to figure out what works for you! So plan ahead, and don’t rely on vending machines or the tournament snack bar.