If there was a pill that could make you happier, smarter, stronger, less likely to be injured, improve basketball shooting percentage by 9% and tennis serving accuracy by 24%, would you take it? Surely that would be the most expensive pill ever created, but what if it were free?

Sleep loss is increasingly common among teenagers due to things like smart phones, laptops, TV, and energy drinks, and as few as 20% of teenagers may be getting the recommended 8-10 hours of sleep per night (1). Sleep loss is not only associated with increased body weight, but a recent study found that one-third of students have even reported falling asleep in school (1,2).

So how does this relate to sports? 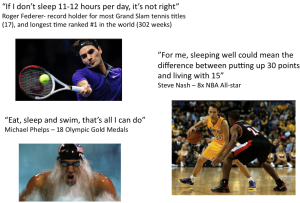 Here are three of the all-time greats who clearly recognize the importance of sleep (3-5). But let’s not just take their word for it, what does the scientific research have to say?

Let’s start with injuries, because you can’t even play if you’re injured. Research from the American Academy of Pediatrics National Conference showed that teenage athletes who slept eight or more hours per night were 68% less likely to be injured than athletes who regularly slept less (6).

To study sleep and athletic performance, the Stanford men’s basketball team spent six weeks getting as much sleep as they could, with a goal of being in bed at least 10 hours each night (7). Not surprisingly, their performance benefited. They had faster sprint times, a 9% improvement in 3-pt and free throw shooting percentage, along with improved physical and mental well-being during practices and games.

A similar study was done at Stanford on the women’s tennis team (8). Players felt better, were able to sprint faster, had less fatigue, and their serving accuracy increased by 24%!

We’ve seen that sleeping more can improve performance, but how about when we don’t sleep enough? After just one night of sleeping only five hours there was a 30% decrease in tennis serving accuracy (9). What’s even more interesting is that they were also given caffeine and studied, but caffeine did not prevent the decline in accuracy. So even though you think you can go to bed late and have a coffee in the morning, your performance will still suffer!

The importance of sleep is seen across all sports, and the U.S. Olympic team members are encouraged to sleep for 9-10 hours per night (10).

“Sleep is huge in my sport. Recovery is the limiting factor, not my ability to run hard. I typically sleep about eight to nine hours a night but then I make sure to schedule 90 minute ‘business meetings’—aka naps—into my day for an afternoon rest.” — Olympic marathoner Ryan Hall (11)

Sleep is also vital for your brain-power! Sleeping 6 hours per night for two weeks can result in cognitive decline equivalent to staying up for two nights in a row, and people are largely unaware of these deficits (12). This means you can’t tell when your lack of sleep is even affecting you! A lack of sleep also signals your brain to consume more food while burning fewer calories. Research has shown a 24% increase in hunger after sleep restriction, with appetite for sweets being increased the most (13). Sleep also has profound effects on our hormones. Even in healthy people, sleep restriction to 5 hours per night for just one week can lower testosterone by 10-15% (14).

Okay, so now that you’re ready to sleep more, how do you do it?

How much sleep do you need?

It certainly is different for everyone, but there are a few easy guidelines to follow. You should be able to wake up naturally (without an alarm). I talk to so many people who think they’re getting enough sleep, but then laugh when I ask if they’re able to wake up without an alarm (or multiple alarms). During periods of athletic training your needs will increase, so for teenage athletes this could mean at least 9-10 hours per night. Naps are also a good thing if you can find the time.

Remember there is a difference between athletes and football players (or soccer/ tennis/ hockey players), and that is, athletes do what’s necessary to prepare to win their sport. This involves doing things besides just playing your sport. Things like working out, eating right, and sleeping enough all contribute to a successful season.