Less than 10% of professional female tennis players and only about 25% of female college tennis players are coached by another female. Unfortunately that leaves a whole lot of girls being coached by someone who probably has very little idea about female physiology! Having some basic understanding in this area can provide a competitive edge for both coaches and players. This post will provide an overview and offer some practical and easy to implement strategies for coaches looking to maximize performance from the female athletes they’re working with.

In order to understand why the needs of a female tennis player may vary throughout the month, let’s take a basic look at what’s going on hormonally. 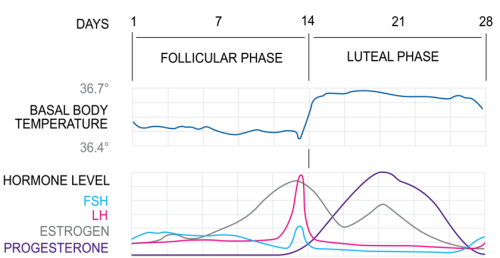 Starting at the top we see the days of the cycle, which is normally 28 days although this can vary. It can be divided into two halves, with day one being the start of the period. Now look at the changes in body temperature. There is a small but relevant increase in core temperature in the middle of the month (at ovulation), which stays elevated for about 7-14 days. Although this is just a slight increase, it does become relevant when playing tennis or working out at high intensities in extreme heat or humidity.

Also worth noting is the fact that menstrual dysfunction is far more common in athletes compared with non-athletes. This can be in the form of skipped cycles, not ovulating during a cycle, having longer than 35 day cycles, or a delayed age of their first cycle.

We won’t get lost in the details of the hormonal changes, but you should understand that there are fluctuations that occur in a fairly predictable manner throughout the month. The middle of the back half (or mid-luteal phase) features elevations in both progesterone and estrogen, which affect a number of things relevant to exercise. Days 20-24 are when the greatest effects on exercise may be seen, and you really need to be smart with your fueling and training.

Why does this matter for a tennis coach?

If the player’s core body temperature at rest is higher, then it will also be higher during exercise and reduce the safe margin for heat accumulation when playing in a hot environment (1). Put another way, it will decrease your player’s performance at high intensities in hot weather. This means that cooling down during practices or matches with cold water and/or shade from the sun, as well as after exercise, becomes more important during the mid-luteal phase. 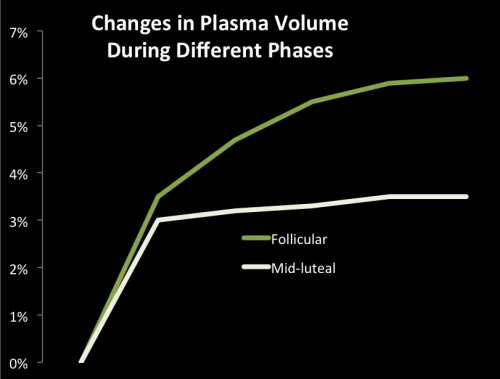 Unfortunately though, it’s not as simple as just drinking more water, because fluid regulation is also changed by hormonal fluctuations. Plasma volume expansion (which provides a measure of how much of a consumed fluid makes it into circulation without being flushed out by the kidneys) changes throughout the month. As you can see here, a study that had women consume a fixed amount of an electrolyte-enhanced beverage showed that the increase in plasma volume was twice as great during the follicular phase as it was during the luteal phase! (2) This means a greater amount of fluid and electrolytes are needed during the mid-luteal phase. Decreased plasma volume can lead to a reduced sweat rate, low blood pressure, and an increased heart rate during exercise. In fact, heart rates may be 6-10 beats per minute higher at a given workload during the mid-luteal phase compared with the follicular phase! (1)

So how can you apply this information?


For starters, all female athletes should know which day of the cycle they’re on. There are a number of free apps to use for this, including glow, period tracker, period planner, and many others. 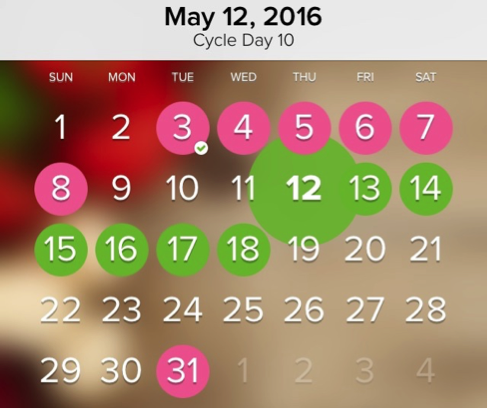 Once you know what day you’re on, remember that days 20-24 will be when you really want to take the extra steps in your preparation. Rather than simply drinking more water, adding salt to your food and drinks will help to hydrate better by increasing the absorption of the fluids. This is particularly important for players who tend to cramp during matches. There is a product I like called the Right Stuff which essentially allows you to salt load, and has been very beneficial to athletes who sweat a lot and are exercising for extended periods of time in extreme heat.

Ideal exercise intensities actually change through the month as well. While it’s certainly not always possible due to the competition schedule, given the option it would be ideal to focus more of the high intensity training during the first half of the month, while decreasing the intensity and focusing more on technique or endurance type of training during the back half of the month.

• Girls and guys have different physiology
• Heat tolerance is decreased during the back half of the month
• Training with your cycle means doing higher intensity workouts in the front half of the month and focusing more on technique and endurance during the back half
• Drink more fluids and use more salt particularly during the mid luteal phase, or days 20-24
• Adequate energy intake is important for preventing nutrient deficiencies as well as maintaining regular menstrual function, optimizing bone density, and being healthy

Congratulations, you now know more about female physiology than 99.9% of your coaching counterparts! Although this is just the tip of the iceberg, I hope you can use this information to have even more of a positive impact on your players!

If you enjoyed this post please feel free to share it. You can also learn more about nutrition for tennis players in my video course, e-book, or in one-on-one sessions.