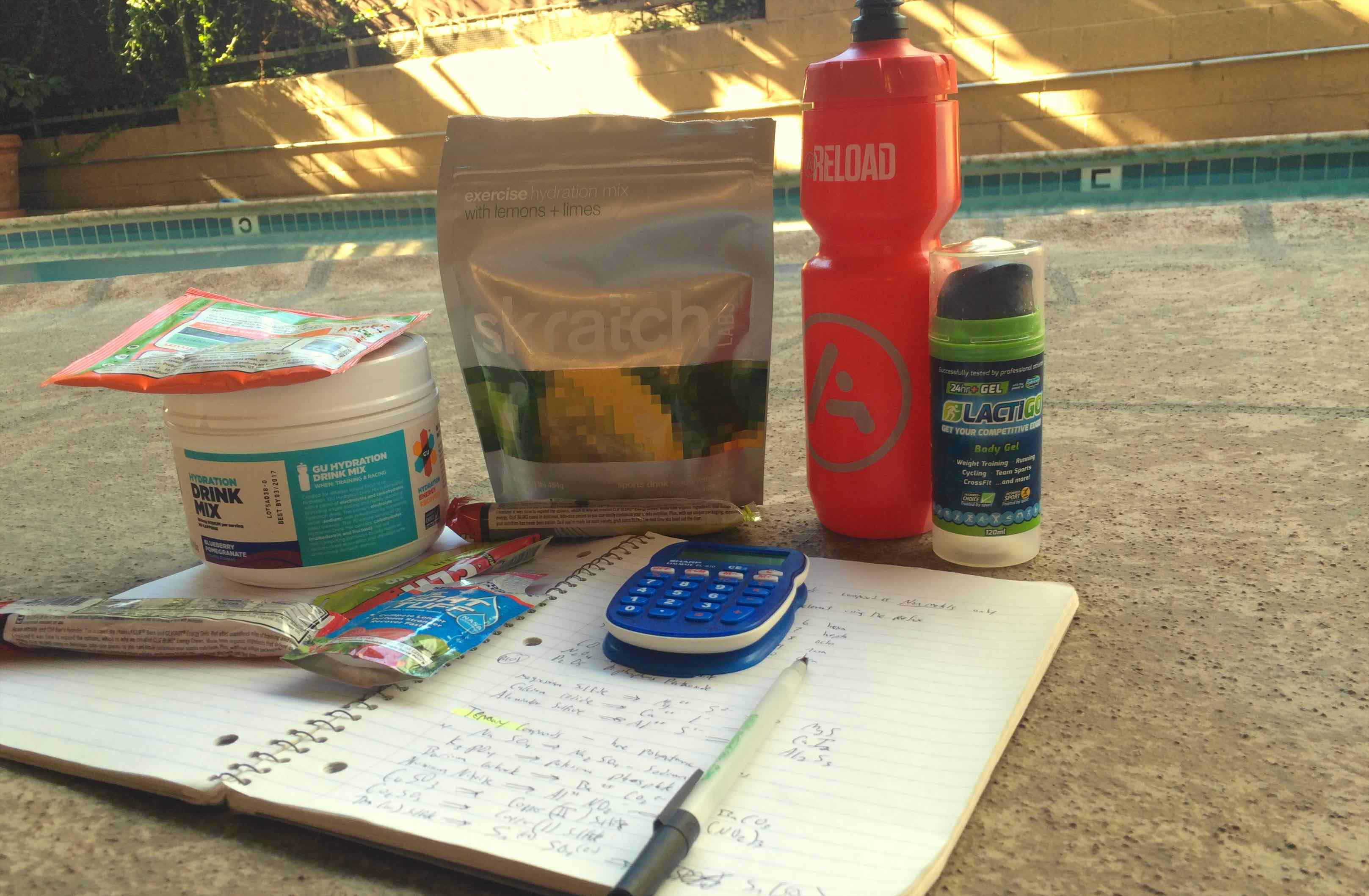 This is the approach that many endurance athletes, at all levels, take with their fueling. While it may seem sensible at first, there are several reasons why this is a bad idea if you’re trying to ride/run/swim as fast as possible.

This is because there is a “sweet spot” of intake for optimal physical performance that is different than what people generally consume freely. This post will look at some of the relevant research studies on fueling plans for endurance athletes, so you can make your own decision on whether or not a fueling plan is important for you. 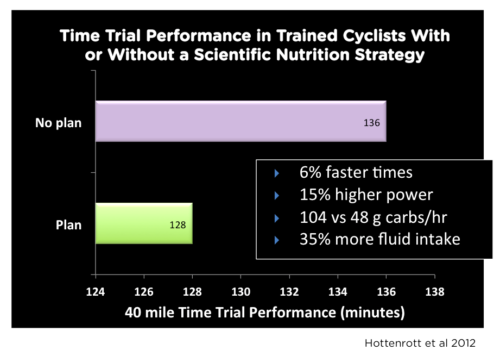 This study took trained (but non-elite) cyclists and had them eat and drink freely or according to the best recommendations (1 liter of fluid/hr, with 500 mg sodium, 60 g glucose, 30 g fructose, and 5 mg/kg caffeine). They rode for 2.5 hours at 70% intensity, followed by a 40-mile time trial. As expected, the intake of fluid, carbohydrate, sodium, and caffeine was higher in those following the plan compared with the free eating scenario, which resulted in a 15% higher power output during the time trial and a finishing time that was 6.3% (eight minutes) faster. 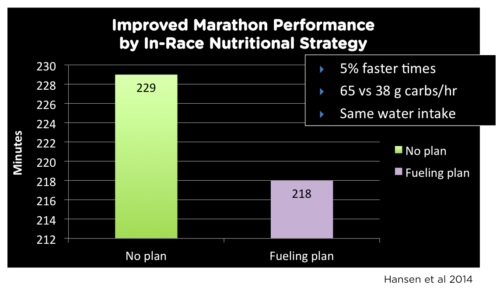 This study used runners (also trained, but not elite level; marathon times around 3.5 hr) and again let them eat and drink freely or consume a scientifically chosen strategy during a marathon. Running recommendations are slightly different than cycling, and the athletes following this plan consumed 750 ml fluid/hr, with 60 g maltodextrin and glucose. Interestingly, the fluid intake was the same between groups, but the group following the plan consumed about 70% more carbohydrate during the race. This resulted in an improvement in finishing time of ~5%, which was about 11 minutes faster. Also noteworthy is that GI distress was not different between groups.

A group of well-trained (but non-pro) cyclists performed two simulated races in the heat (~89 degrees F); once when they drank as much water as they wanted and once when they followed a preset drinking plan that matched their sweat rate.

The simulated race included three 5 km time trials separated by riding 5 km at 50% effort, which is a fairly good approximation of what a race might be like. During the first two 5 km time trials there were no differences in cycling speed, but during the third one the group following the drinking plan was able to ride on average 5.1% faster! In addition to performance, other physiological variables were measured and as expected the group following the drinking plan had a lower amount of heat stress (more precisely referred to as thermoregulatory strain), and were more effective at sweating. When drinking freely, the cyclists ended being dehydrated by 1.8% of their body weight, while the cyclists following the plan ended up with just a 0.5% reduction in body weight.

Effects of salt supplementation on performance during a half-ironman

We can also see average improvements of 26 minutes in Ironman 70.3 finishing times when athletes consumed additional salt compared with placebo. 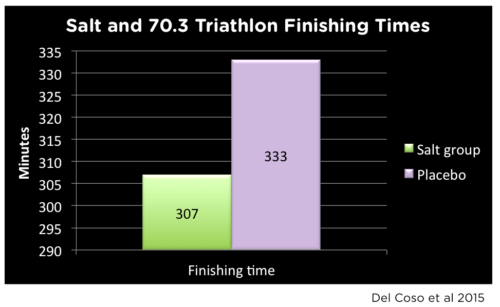 This study was observational in nature, and looked at energy, nutrient, and fluid intakes during endurance competitions as well as associations with GI symptoms in elite athletes. Below is a graph of carbohydrate and finishing times during the Ironman European Championships. Total carbohydrate intake was correlated with faster finishing times, but also with increased nausea and flatulence. This further underscores the importance of carbohydrate in high-level endurance exercise, as well as the need for a smart nutrition plan so you don’t consume too much for your body to handle.

When I work with athletes, I do a detailed analysis of what is being consumed during exercise. I often find intakes well below the best scientific recommendations, but also intakes that far exceed the amount our guts can process (which not surprisingly often accompanies complaints of GI distress). As we gear up for races, the plan gets dialed in down to the mile, so the athlete can worry about performing well and enjoying the race (not doing math in their head for 10 hours trying to be sure their hourly intake is spread out properly)!

Here is an email I recently received that is worth sharing…

“Everything fell into place today. I peaked, and the nutrition plan fit into the performance like gears in a machine. I followed the plan religiously. No deviations, followed the charts while out on the run and bike (affixed to my bike and running bottle). I have no doubt this plan enabled me to cut almost an hour off my previous Ironman time. Every sport: swim, bike, and run, was faster. By a lot. Thank you!”

At the same time, plans should not be set in stone! Many factors can influence your needs on race day, most obviously weather conditions. For example, you will need to drink more on hotter days and less on colder days. I always look at the weather forecasts to plan as best as we can, but for this reason I also include a few ‘audibles’ that you can call on game day in order to adjust your intake accordingly. *This is also why I am not a fan of drinking all of your calories, because if the weather changes then the amount of calories you’ll consume will also change (rather than just adjusting the fluid and electrolyte intake).

Disclaimer: I have a vested interest in getting you on a fueling plan for your next race, because my business thrives when my athletes thrive. Feel free to reach out if this is something that you think may benefit you, and I’d be happy to chat a bit more about the specifics of your situation and whether or not this would help you.